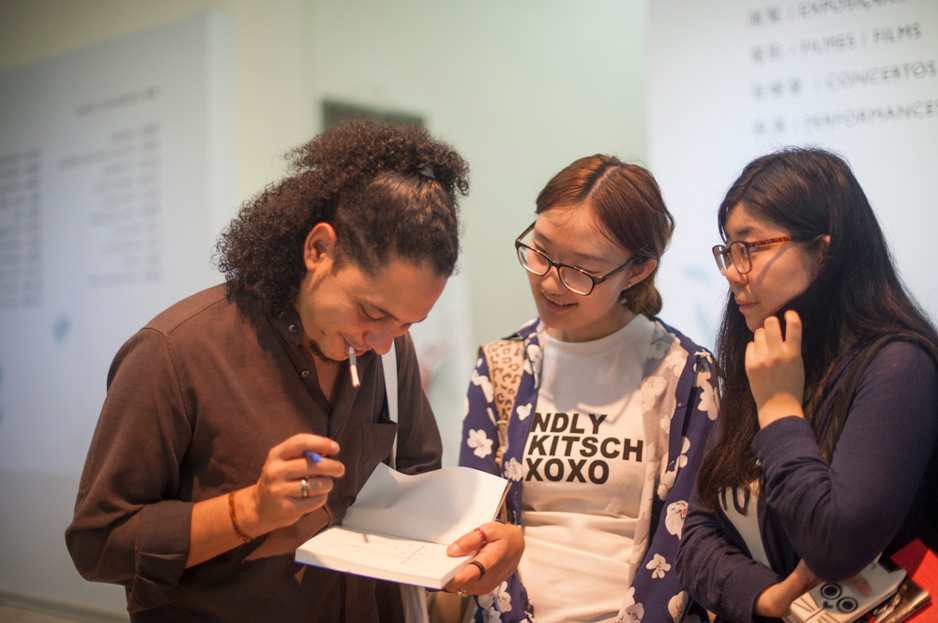 Filmmakers Ann Hui and João Botelho, and authors Wong Bik-wan and Francisco José Viegas are also part of this year’s programme, from March 19 to 29. Children literature is one of the highlights.

The Script Road – Macau Literary Festival is back for its 4th edition, scheduled to happen from March 19 to 29, 2015, with its base at the Old Court Building. The festival, founded by local newspaper Ponto Final in 2012 as the first grand meeting of literates from China and Portuguese Speaking Countries ever to be organized in the world, is bringing again more than 30 renown guests to town – writers, publishers, filmmakers, visual artists and musicians.

Chinese writer Wang Anyi, Chairwoman of Writers’ Association of Shanghai and author of novels such as The Song of Everlasting Sorrow, is amongst the star guests this year. On the Portuguese-speaking side, Angolan author Ondjaki, winner of the prestigious Jabuti Prize (2010) for his novel Avódezanove e o Segredo do Soviético, and the Saramago Prize (2013) for Os Transparentes is one of the most highlighted names.

“This is year, for the first time, we’re inviting the youngest readers to join the Festival, by having children literature writers highlighted at The Script Road. Overall, it’s going to be a festival aiming to have the attention of the youth, as it’s also noticeable by some of the musicians and visual artists we’ve invited”, says Macau Literary Festival Director, Ricardo Pinto.

Hongkongnese novelist Wong Bik-wan is also joining the Macau Literary Festival for a stage-performance, after winning the Dream of Red Chamber Award last year with the novel Children of Darkness. Acclaimed Chinese poet Xi Chuan and Taiwanese poet and Curator of the Taipei Poetry Festival, Hung Hung; one of the most famous children literature authors in China, Yang Hongying; renown younger writers Yan Ge (White Horse) and Murong Xuecun (Leave Me Alone – A Novel of Chengdu) complete the confirmed list of Chinese-speaking authors to attend the event.

“The 2015 Macau Literary Festival is going to bring a stunning line-up of Chinese authors. For Mainland Chinese authors, Wang Anyi is one of the best contemporary novelist in China. We are also delighted to have the renowned critical writer and New York Times columnist Murong Xuecun as well as the young novelist Yan Ge, who has already published ten novels, to join this year. In addition we are glad to present the Hong Kong well-known author Wong Bik-wan, the Taiwanese poet and screenwriter Hung Hung and also the Macau local award-winning author Joe Tang. For children literature, this year the festival is bringing you the Chinese children’s favourite author Yang Hongying, who has been nominated for the Hans Christian Andersen Literature Award in 2014”, says The Script Road Vice-Director, Yao Jing Ming.

“The group of Lusophone writers we’re bringing to Macau this year is again quite relevant. They’re award-winning authors, popular and well received by the critic, as well as translated to other languages. Both poetry, with Maria do Rosário Pedreira and Gregório Duvivier; and novel, with Ondjaki, Francisco José Viegas, João Tordo and David Machado, are very well represented. Plus, most of these authors are also writing in different genres and many of them publishing books for younger audiences that we really want to attract this year”, says The Script Road Vice-Director, Hélder Beja.

Local writers will also take the stage and visit schools and universities. Novelist and children literature Joe Tang is one of the invited guests to form part of the programme. Macanese Cecília Jorge, whose writing about Macanese cuisine became popular along the years, is also joining this year’s Literary Festival, as well as Rogério Beltrão Coelho, author and publisher working for many years on Macau’s literature.

As in previous years, the festival will promote talks, book launches, workshops and a series of different activities open to everyone.

The 3rd volume of the collection The Script Road – Short Stories and Other Writings will be launched during this year’s edition. Invited guests from the 2014 edition will see their stories, poems and essays published alongside with the winners of The Script Road Short Story Competition, to be announced at the festival’s press conference, in early March.

LITERATURE AND CINEMA TOGETHER

Another highlight of The Script Road’s 4th edition is the film programming, with acclaimed filmmakers Ann Hui and João Botelho coming to Macau to show their latest films.

Ann Hui, who was awarded last year as Asian Filmmaker of the Year at Busan International Film Festival, is showing The Golden Era, a biopic drama about 1930s author Xiao Hong, one of the most important female writers in 20th century China, starring Tang Wei and Feng Shaofeng.

Portuguese director João Botelho is bringing two films with him: Os Mais, adaptation of one of the most relevant novels in Portuguese Literature, written by Eça de Queiroz; and Filme do Desassossego, where Botelho searches for inspiration in Fernando Pessoa’s remarkable poetic voice.

Miguel Costa, also coming from Portugal, will be showing No Divã, a film starring Paulo Pires, Baastet Cabeleira and Maestro António Victorino d’Almeida. Victorino d’Almeida, himself a writer, musician and famous TV broadcaster, is also a guest of this year’s festival, promises to delight local audiences with his words but also with his universal music, by giving two concerts.

SCRIPT ROAD UNITES MUSIC AND POETRY AT THE VENETIAN MACAO

Sponsored by Sands China Ltd. for the third consecutive year, The Script Road Concert has become one of the most highly-anticipated events on the Macau Literary Festival programme and a fixture in Macau’s cultural calendar which is yet another strong testament to Sands China’s continuing contribution to the development of arts and culture in Macau. Events like The Script Road Concert aim to enrich the cultural landscape of Macau and to facilitate cultural exchange.

Headlining the equinoctial event is a tireless Cantonese hip hop collective. Courageous in the face of controversy, they’ve been standing up for their beliefs and their community and culture since the early 90s. LMF is a large group with a stirring stage presence that features four emcees plus an award-winning turntablist and full rock band. They reformed in 2009 after a six-year hiatus following the release of their last album finalazy. This reunion also marked the ten-year anniversary of their debut release, LazyMuthaFucka which sold 100,000 copies worldwide which was an unprecedented triumph for a Hong Kong indie band. This pioneering posse has given voice to a generation of disenfranchised Hong Kong youth with an energetic blend of metal and funk, underpinning hip hop lyrics that cultivate self-worth and critique the establishment in equal measure.

Social and moral critique have another vehicle in the vocabulary of Brazilian rapper Gabriel o Pensador. The Thinker’s beginnings date back to the early 90s, as well, when his first, self-titled album garnered attention for the caustic wit in tracks like “Lôrabúrra” (Dumblonde), “Retrato de um Playboy” (Portrait of a Playboy) and “Lavagem Cerebral” (Brainwashing). Over the next twelve years he would release another six albums and expand his renown both at home, opening for U2’s Brazilian tour in 1998, and overseas, winning legions of fans on the Portuguese festival circuit. Following a seven-year respite from the recording studio, Gabriel has “returned to hip hop” with Sem Crise which features electronic tracks and heavy stylistic flirtation with such Brazilian musical styles as forró and baião. Of the fifth track, “Linhas Tortas” (Crooked Lines), which traces the long arc of his career and his sources of inspiration, Gabriel says, “I break out in gooseflesh whenever I sing it live.”

Live performances are bread and butter for a band like Blademark. One of Macau’s most prolific and hardest working musical acts, they are celebrating their tenth anniversary this year. It is their boundless energy that keeps them fresh as well as being the key ingredient in their metal sound that has been infused with elements of rap, funk and melodic rock. An international quartet, representative of cosmopolitan Macau, Macanese founder and front man Fortes Pakeong Sequeira and bassist Raymond Nogueira were joined in 2013 by Japanese guitarist Akitsugu Fukushima and Canadian drummer Darren Kopas. Their potent set will set the stage for an inspiring night of rhythm and rhyme.