Yu Jian (1954), a poet, essayist, literary critic, novelist, editor, photographer, documentary filmmaker, and university professor, was born and raised in Kunming. He is widely recognized as one of the foremost poets of his generation. His numerous publications, which span more than three decades and various literary genres, include the landmark five-volume Collected Yu Jian, the four-volume Selected Essays of Yu Jian, and more recently Who Is He: Poems 2007-2011 (2013). Yu Jian’s writings have been translated into fourteen languages, including English. Among his documentaries are Hometown (2009) and Jade Green Station (in collaboration with anthropologist Zhu Xiaoyang, 2003), both of which constitute a cinematic expression that allows Yu Jian to extend his poetic, humanistic vision to his ongoing ecological, socio-political, and cultural concerns about life in Yunnan. A regular guest at major poetry festivals, Yu Jian has held lectures and readings at leading universities and literary events worldwide. He has lived his whole life in Kunming. 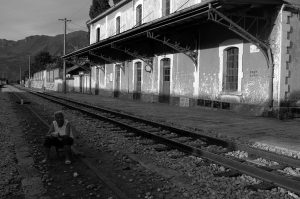 In 1910, the French started building a railway linking the Chinese province of Yunnan with Vietnam and the tiny village of “Jade” soon became a lively train station on the famous train line. China was then on the eve of a tormented era. The director interviewed different  characters living in the village and working at the train station today (or who used to do so in the past). Observation was made of the world in which they all live, underlie the director’s perception of time, history and life. A railway, a station, strong characters and dialogues, political crisis, daily life… all of those elements charged with strong symbolic meaning help draw a picture of the conflicting relationship still existing between an old empire where one’s life and world never changed and today’s modern and swirling China. They also describe the modest yet beautiful world in which common Chinese people live, with a strong sense of both dignity and crisis.