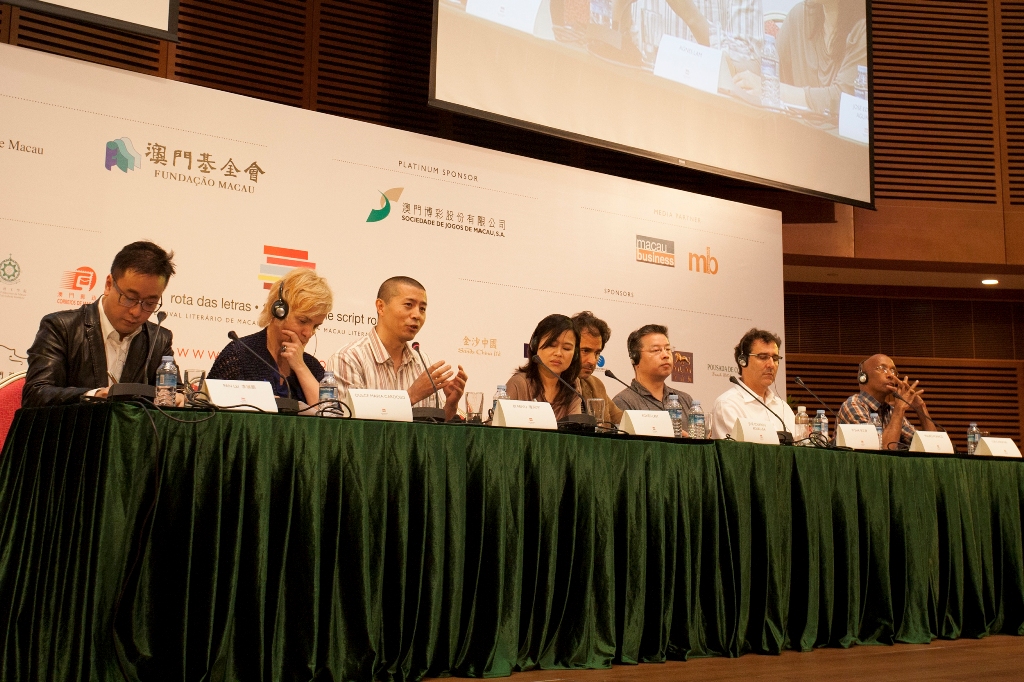 Now with greater involvement of public bodies such as the Cultural Institute and Macao Foundation, “the festival gains critical mass and ventures into new areas”, with the presence of French authors, a poetry competition as well as a short story competition, a book fair, theatre, artists in residence and music concerts. “As others have said before, that which I have already done is of no interest to me now: I only think about that which I have not yet done. That’s the spirit that drives us. Yes, this festival will not be like the first one”, said Ricardo Pinto.

The Director started his speech with a tribute to the architect Manuel Vicente and described the “great loss for Macau which was the death yesterday (Saturday) of Manuel Vicente, rightly regarded as ‘The Architect of Macau'”. Ricardo Pinto went on to describe him as a “man of a great intelligence and a unique sense of humour” who helped “many generations to think Macau, he made ​​many people love Macau”.

The Vice President of the Cultural Institute and Deputy Director of The Script Road, Jing Yao Ming, thanked the guests from around the world for their presence and stressed that Macau is a place of rich cultural diversity, “its writers come from different countries and backgrounds and have different cultures” and proposed the question “how can we define the literature of Macau?”. Jing Yao Ming added that “there are still disputes and these disputes will continue,” and challenged the participants “maybe our invited experts of the literary world can discuss and answer this question”.

The representative of Macao Foundation at the ceremony, Zhong Yi Seabra de Mascarenhas, said that “Macao Foundation believes that, today, our town is increasingly feeling the influences of globalization”, adding “to this end the Macau Literary Festival – The Script Road has created, not only a meeting place for different cultures, but also new opportunities to show the world what is being done in Macau today, namely in the world of literature”.

“Placing Macau in contemporary literature is one of the founding ideas of the Macau Literary Festival – The Script Road” said the Deputy Director of the festival, Hélder Beja, who presented the festival’s first book in the collection of stories and essays. Entitled First things First, this book resulted from the first edition of the festival and is “a happy synthesis of those unforgettable moments when Macau rediscovered itself through The Script Road” added Ricardo Pinto. The opening ceremony also saw the awarding of prizes to some of the short story competition winners present at the ceremony, Susana Gonçalves, Kelvin Costa, Célia Matias and Lawrence Lei.

The first panel of the Festival, Writers’ Influences and Perspectives in a Globalised World, moderated by Agnes Lam, featured enthusiastic participation by several guests, including Pan Lei from Macau, Mauro Munhoz from Brazil, the Chinese authors Bi Feiyu and Yi Sha, the Timorese Luís Cardoso, the Portuguese author Dulce Maria Cardoso and Angolan writer José Eduardo Agualusa. The “history of mankind is a history of encounters and disencounters and what is important is for these encounters to be done in peace and with respect for one another, as we are doing here today at this literary meeting. I have a deep dislike of the idea of pure cultures, as much as I dislike the idea of frontiers and police, I dream that one day all the border police turn into architects and build bridges”, said José Eduardo Agualusa. Luis Cardoso spoke of his role as a “Timorese diplomat in the world” during the struggle for independence of East Timor against Indonesia and the importance of the relationship between Timor and Macau. “Many Macanese were exiled to Timor during the colonial period and many Macanese married Timorese, had children and many Timorese fought for the independence of East Timor”, said Luis Cardoso.

On the topic of cultural globalization the author Dulce Maria Cardoso said that “What we are talking about here is a political issue, which is citizens being more open to the world”.

After the dynamic discussion the official opening of the Book Fair in the Praça da Amizade (Hotel Sintra Square) took place, providing a unique opportunity for the public to meet the authors and get autographs. The opening day ended with a dynamic concert by Croatian jazz singer Ines Trickovic.

The opening day began with the premiere of the film “Nada tenho de meu – work in progress” by Miguel Gonçalves Mendes, and after a discussion with the audience the director said that it would be good if the Macau Literary Festival – The Script Road resulted in tangible projects like this film, that brought together three writers, actors and directors. Miguel Gonçalves Mendes is already working on another project, taking advantage of his return to Macau to film the Portuguese writer Valter Hugo Mãe for a new project called “O sentido da vida”, in co-production with Brazilian director Fernando Meirelles.

Praça da Amizade was the location for the pre-opening event of The Script Road, with a small sample of the book fair and concerts, which took place on Saturday night, anticipating a week filled with many events. “I have love for Macau” the musician Wilson Tsang, from the cultural project T (H) REE, said, a project which gathers musicians from Portugal and several Asian countries. The T (H) REE project, along with the Portuguese musician Bernard Devlin, took the stage, animating the night before the official opening of the event.