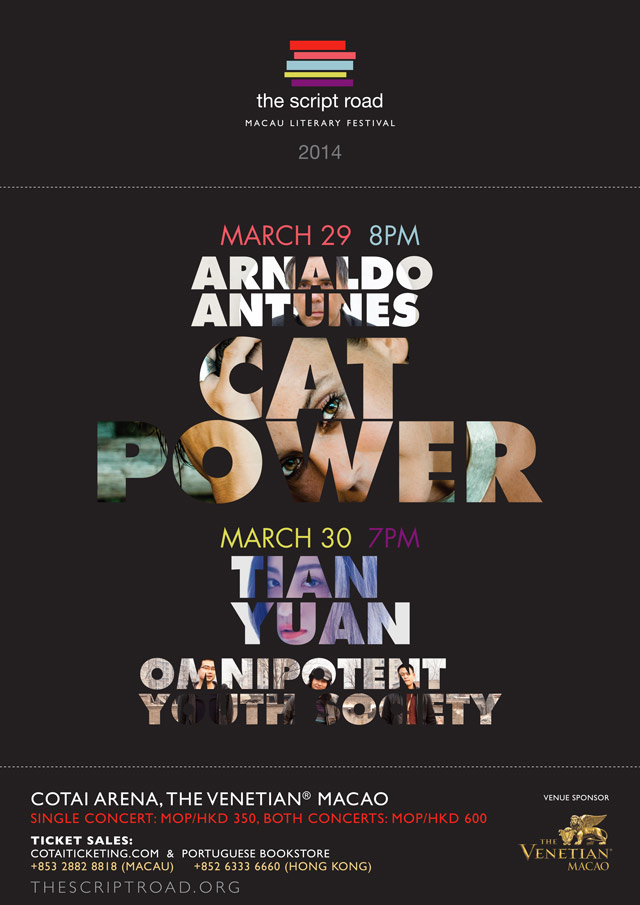 Sponsored by Sands China Ltd. for the second consecutive year, and featuring two of the most highly-anticipated performances of this year’s Macau Literary Festival, The Script Road Concerts are another strong testament to Sands China’s ongoing contribution to the development of arts and culture in Macao. Events like The Script Road Concerts aim to enrich the cultural landscape of Macao and to facilitate cultural exchange.

First in a foursome of musical acts whose artistry relies as much on the word as it does on tone is songsmith Arnaldo Antunes, erstwhile vocalist and lead lyricist of seminal Brazilian rock band the Titãs, partner to Marisa Monte in the hit collaboration Tribalistas and award-winning poet and solo artist since 1992. With a presence “at oncequiet and impressive, violent and smooth, refined and pop,” Antunes “embraces both the legacy of Bossa Nova” and “the romantic music of the 50s, and rock and post-rock already merged with reggae and funk” (Bomb Magazine). Last year’s Disco became the 13th solo release in 20 years to feature his warm bossa baritone, singing sharp lyrics with intimacy and the spontaneity of speech.

Antunes takes to the Cotai Arena stage at 8pm on March 29, Saturday, in advance of Cat Power, stage name of American indie chanteuse Chan Marshall. The acclaimed singer-songwriter scored a spectacular return to form with her latest record, Sun. A “passionate pop album of electronic music, filtered through a singer-songwriter’s soul” (Consequence of Sound), it features new songs that are “a contemporary splash to the face” (Pitchfork). The first album of original Cat Power material in six years, Sun was written, performed and produced entirely by Marshall, who calls the record “a rebirth”. Very well-received by her fans, Sun opened at number 10 on the Billboard 200, making it the highest charting Cat Power album to date.

The following evening of March 30 sees Wuhan native Tian Yuan open an earlier Sunday concert, at 7pm. The velvet-voiced pixie, well known to moviegoers for her HK Film Award-winning screen debut as the lesbian love interest of Josie Ho in the 2004 film Butterfly, began her musical career in 2001 at the tender age of 16, fronting the acclaimed band Hopscotch. Equally at home writing novels and singing in English or Mandarin, Tian released her self-titled solo debut in 2010 with a collection of songs in both languages.

Following Tian’s performance Sunday evening comes the sophisticated psychedelia of the Omnipotent Youth Society (OYS), who forge trumpet and string-laced folk-rock anthems featuring “powerful, poetic lyrics and infectious hooks” (TimeOut Shanghai). Their songs, rooted in the industrial dystopia of their hometown, Shijiazhuang, resonate powerfully with the everyman and have earned them legions of fans who know all the words by heart. Dark horse winners of Band of the Year at the 2011 Chinese Music Media Awards (an honour usually reserved for mainstream pop acts), the quartet released their first and only album to date in 2010, having already honed their sound playing together for 16 years.