Not Caring of not Knowing Where to go 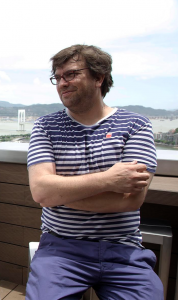 Ezaak Ez (1966) is the artistic name of Isaque Pereira, who has degrees in Communication Sciences from University of Minho, and in Photography from Ar.co – Centro de Arte e Comunicação Visual, both in Portugal. The language as a performative tool, the interaction between visual and sound languages, and between literature and the performing arts, are among his main artistic interests.

François Girouard (1976) is a composer, guitarist and drummer born in Joliette, Canada. His studies in electroacoustic composition at the University of Montreal contributed to creative works in dance, theatre and individual performances. In 2015 he released his first solo album, “Bestiaire” (Cycle de Fées). He has played alongside bands such as Dat Trio