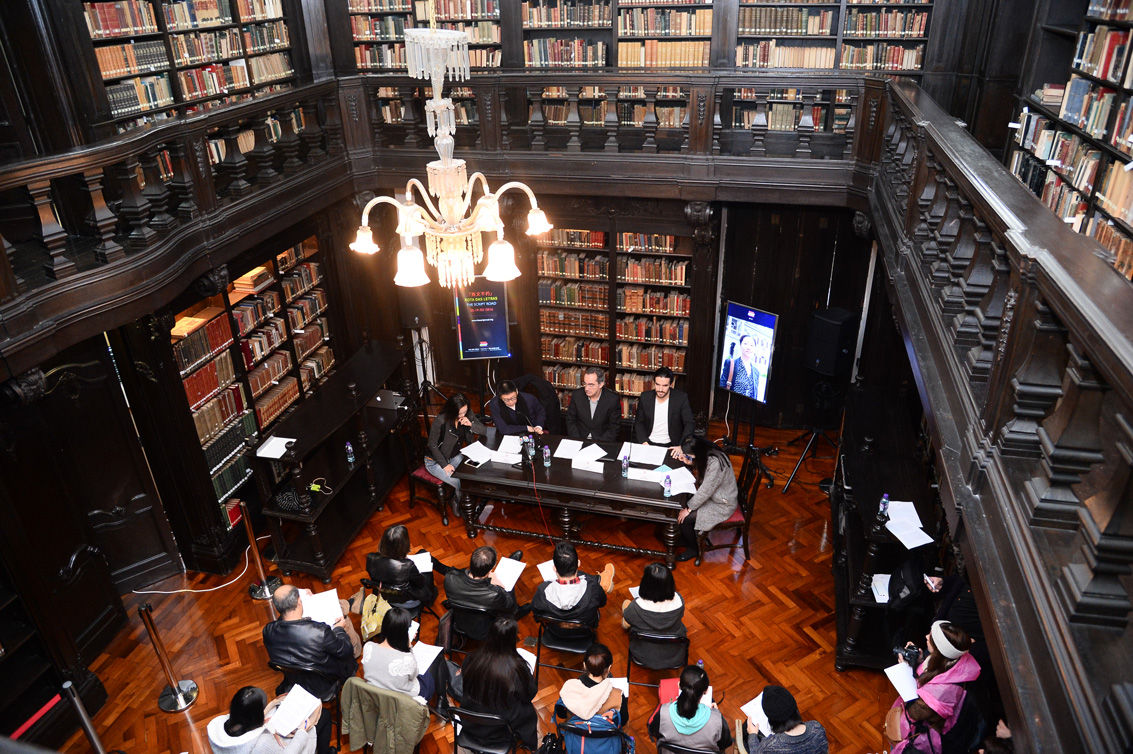 The Script Road – Macau Literary Festival is back for its 5th edition, scheduled to happen from March 5 to 19, 2016, with its base at the Old Court Building. The festival, founded by local newspaper Ponto Final in 2012 as the first grand meeting of literates from China and Portuguese Speaking Countries ever to be organized in the world, is bringing more than 40 renowned guests to town – writers, filmmakers, actors, visual artists and musicians.

For the first time, the Festival will pay a tribute to two writers from the past. On the 400th anniversary of his death, Tang Xianzu 湯顯祖 is remembered as one of the first Chinese authors to have contacted with foreigners in Macau, a city he visited in 1591. Tang, a very famous playwriter from the Ming Dynasty and the author of The Peony Pavilion, wrote a number of poems about Macau, immortalizing the city in his works.

Portuguese poet Camilo Pessanha is the other author to deserve the Festival’s attention, 90 years after his death. The author of Clepsidra, who lived and died in Macau, left a valuable legacy still being very much studied these days. The Script Road is inviting some of the most renown scholars specialized in Pessanha’s works to join the programme this year – Paulo Franchetti, Daniel Pires and Pedro Barreiros.

A WIDE RANGE OF AUTHORS

On the Portuguese-speaking guest-list, writer and historian José Pacheco Pereira is one of the highlights. Proprietor of one of the most important private libraries in Portugal, author of Communist leader Álvaro Cunhal extensive biography, Pacheco Pereira is amongst the most influential intellectuals of our times in Europe. Also from Portugal, writers Rui Zink, Matilde Campilho, Paulo José Miranda, Pedro Mexia, Ricardo Adolfo, Graça Pacheco Jorge and Luísa Fortes da Cunha are amongst the confirmed names. Award winner Brazilian author Luiz Ruffato will visit Macau as well, just like Marcelino Freire, Carol Rodrigues and Felipe Munhoz. Ernesto Dabo, from Guinea-Bissau, completes the list of authors confirmed so far (see bios in attach).

The 5th edition of The Script Road marks a big step in terms of giving the festival a more international feel, something the Organizers have been working on during these last few years. The 2016 Macau Literary Festival is welcoming authors from Ireland, Australia, Spain, Wales, Sweden, Philippines and the U.S. – some via regional / international collaborations, some exclusively invited by the Festival.

As usual, local and Macau-based writers are a relevant part of The Script Road Programme. Amongst them are local writers Mu Xinxin 穆欣欣 and Carlos Morais José (also experts and admirers of the works of Tang Xianzu and Camilo Pessanha, respectively; renowned poet Un Sio San; scholar, literary translator and poet Carlos André and journalist and writer Mark O’Neill, who splits his time between Hong Kong, Macau and Mainland China.

Local filmmakers also have a strong participation this year, with Tracy Choi, Emily Chan and Cheong Kin Man joining The Script Road to screen one film each.

Other than local directors, the Festival is bringing to Macau two filmmakers from Portugal. Luís Filipe Rocha, the man who’ve adapted Senna Fernandes’ book Love and Little Toes to cinema; and Sofia Marques, an award-winner documentary-maker, who will screen some of their works in town. A prominent Chinese director is expected to be confirmed soon.

THE ART OF SEEING

On the visual arts, the Old Court Building will be welcoming the works of a number of creators. Local artist Alexandre Marreiros is going to showcase some of his works. Eric Fok, known by depicting the old and the new Macau in his map-alike works, will present a solo exhibition; as well as Pedro Barreiros, showing some of his works about Macau – including a painting inspired by Camilo Pessanha. Chinese Hunan-born painter and calligrapher Ouyang Shijian is the other artist to showcase his works during the festival.

Performing arts and music concerts will also play a relevant role in this 2016 edition. All information about a number of acts is going to be released soon.