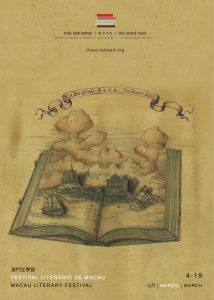 Eric Fok, the internationally known Macau’s artist is the author of The Script Road – Macau Literary Festival’s 6th edition official image. Macau’s largest literary event takes place from 4–19 March 2017 and will be based at the Old Court Building.

Eric Fok – renowned for his work by technical pen, which he uses to integrate ancient maps reproductions with new constructions – is the author of The Script Road – Macau Literary Festival’s 6th edition official image. His work embodies tradition and modernity, combining his signature with the festival’s theme and identity.

“Literary works drag us into the written word, reading transforms the text into a visual image for the reader. The open book in the image is just like as we are reading the poems about Macau’s past. The view of Praia Grande Avenue in the illustration is the one from the Old Court Building, where the festival takes place”, says Erik Fok about his work.