AUTHORS DISCUSS WHY THE WRITERS MIGHT BE MORE IMPORTANT THAN POLITICIANS 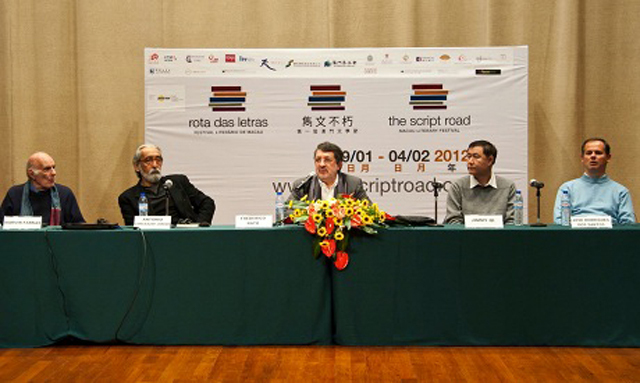 On the third day of the literary festival, a group of fours writers from Portugal, Hong Kong, China and Macau were challenged to say if writing these days could still be a political tool.
Portuguese best-selling author and journalist José Rodrigues dos Santos, who wrote among other works “The Wrath of God”, which deals with Islamism and extremism, has no doubt that “all art is political in a way, and all art has to be meaningful”, he defended.

An experienced reporter who covered many war zones from Iraq to Libya, author dos Santos claimed that as a novelist, he feels “more truthful when you write a novel,” as he is not restrained by the journalistic codes of delivering news. “Fiction is a very powerful tool to tell the truth,” he stated, adding that “writing is about freedom, and you have to say politically incorrect things to move things forwards.

Chinese author Jimmy Qi agreed and underlined that the writer “can be very political but it’s not a politician.” Qi’s opinion goes in fact further, defending that writers are in fact more important than politicians as their words resist the test of times. “. Without the writing of the bible, where would God be? And where would Confucius be?

In this sense, Macau’s writer and artist António Conceição Junior, who recently published “Conversas do Chá e do Café” (Tea and Coffee chats) “words are sacred and when we profit from someone’s’ knowledge, we are reliving the authors experience and benefiting from it.” That is why he sees the man as a political animal, who must act as political. “I cannot understand art for the sake of art. It always serves a purpose. The writer has like an agenda – which gives him the urge to write, to communicate,” he added.

This debate was concluded with the poignant testimonies of 87 years old Marvin Farkas, an American living in Hong Kong since 1954. This man of many lives was a Broadway star before coming to Hong Kong where he was filmmaker, working with stars like Orson Well,s and later a regional and war reporter, spending 12 years covering the Vietnam war. “I started to write at the age of 77 so I can speak my mind freely,” he said during the presentation of his memoirs “an Eastern Saga.”

The afternoon of this Tuesday was dedicated to the topic “Translation: limits and Possibilities.” Macau academic Yao Jin Ming, author of poetry and Chinese translator of Portuguese poet Eugénio de Andrade, stated that before the act of translating, “translators have to fall in love for the work. It’s a love process.” “Then, they will be able to translate,” he added.

Prestigious writer Su Tong, author of “Rice” , “My Life as an Emperor,” and “Wives and Concubines”, with many of his books translated in different languages, described the translator as “a friend.” “When I do not understand a foreign language, I have to have a translator. He is therefore a friend and authors should respect him,” he said.

Writer José Luis Peixoto, one of the most translated Portuguese authors in no less than 20 idioms, alerted for the risks of distortion of the original work that translation could cause. But these changes can also operate in favour of some books. “I read (Brazilian author) Paulo Coelho and was not impressed. But people tell me that his books in French are quite good,” he said with a smile.

Asked about the language policy in Macau after the handover, the director of the Portuguese Oriental Institute, Rui Rocha explained that despite the official bilingual status of the territory, the reality showed that the Portuguese is not compulsory at Chinese schools and that the learning of Mandarin is also problematic in Portuguese ones. “That’s the state of the affairs,” he added.

The third day was also dedicated to two documentaries dealing with the plight of Chinese migrants in the world. Mozambican journalist and filmmaker Yara Costa presented “Why are they here? Chinese stories in Africa”, a film taking place in Mozambique island, Lesotho and Ghana, showing the relationships and tensions of Chinese immigrants with local populations.
Last, but not least, filmmaker Ivo Ferreira showcased his 2009 documentary “Go with the Wind”, about the emotional dilemma of Chinese immigrants in Portugal and Spain and the home they left behind.

To wrap up Tuesday, famous Portuguese fado singer Aldina Duarte gave a concert at the University of Macau, where she paid tribute to Fado, the Portuguese traditional song, which was recently recognized by UNESCO as intangible heritage of humanity.